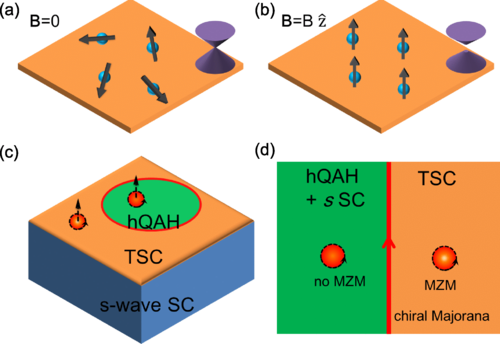 FeSeTe has recently emerged as a leading candidate material for the two-dimensional topological superconductivity (TSC). Two reasons for the excitement are the high Tc of the system and the fact that the Majorana zero modes (MZMs) inside the vortex cores live on the exposed surface rather than at the interface of a heterostructure as in the proximitized topological insulators. However, the recent scanning tunneling spectroscopy data have shown that, contrary to the theoretical expectation, the MZM does not exist inside every vortex core. Hence there are “full” vortices with MZMs and “empty” vortices without MZMs. Moreover, the fraction of “empty” vortices increases with an increase in the magnetic field. We propose the possibility of two distinct gapped states competing for the topological surface states in FeSeTe: the TSC and half quantum anomalous Hall (hQAH). The latter is promoted by a magnetic field through the alignment of impurity magnetic moments such as Fe interstitials. When hQAH takes over the topological surface state, the surface will become transparent to scanning tunneling microscopy and the nature of the vortices in such regions will appear identical to what is expected of the vortices in the bulk, i.e., empty. The unmistakable signature of the proposed mechanism for empty vortices will be the existance of chiral Majorana modes(CMM) at the domain wall between an hQAH region and a TSC region. Such CMMs should be observable by measuring local density of states along a line connecting an empty vortex to a nearby full vortex.

More details from the publisher >

Details from the ArXiV >